Language is by far one of the best inventions of humankind. It has broken more barriers than one can imagine. But even today language barrier exists where the power of the internet and real-time translators falls short. There are apps that can help you learn any foreign language with ease. The process of learning from these apps is quite easy and with some practice, proper fluency can be achieved. This is the list of apps that will be useful in order to learn a new foreign language with ease.

Duolingo is one of my favorite apps to learn a foreign language. It is easy to use, fun and is useful for people who’re always on the go. It’s fast-paced and unlike other apps, it focuses on pronunciation as well. The app utilizes pictures, animations, voice, speech and much more to give the best in class experience to its users. Users can learn Spanish, French, English and many more languages including fictional languages like High Valyrian and Klingon. The app is adaptable because users who already know a little bit about a foreign language can take tests accordingly and the app will adapt itself to ask questions based on its evaluation of users answers. 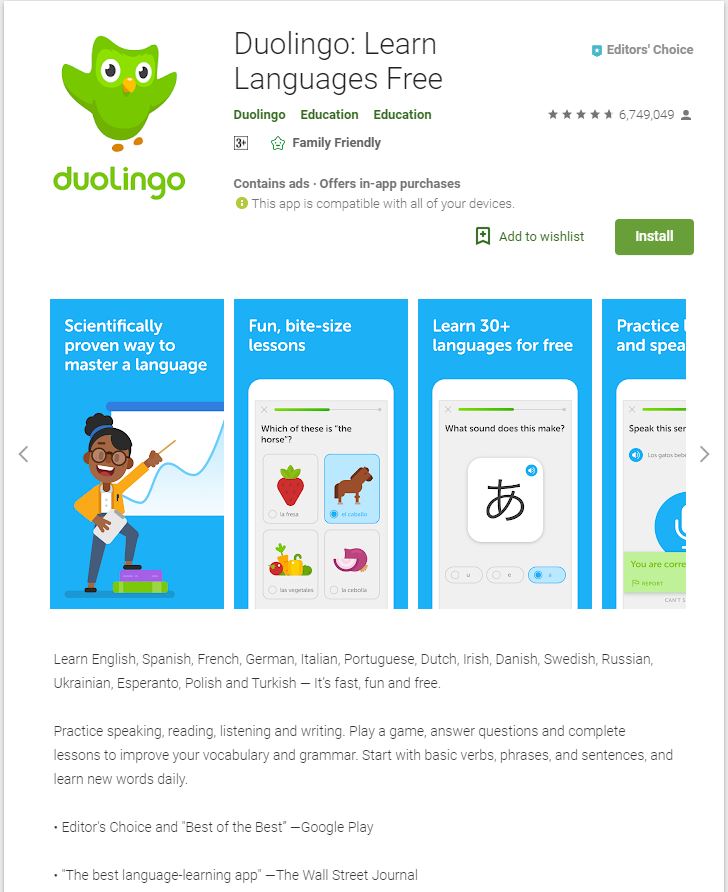 Memrise can be a great tool if you wish to memorize (pun intended) and learn new words from a foreign language. The app pairs foreign language words with similar sounding words from users’ native language which helps them build a connection to help them memorize. The app also uses visual elements to aid the process of learning. The app also uses a unique method in which it mixes up the translations. This helps users learn a few varieties of words at once. This method can be used multiple times to learn the same set of words in different sequence to help them last longer in users’ memory. 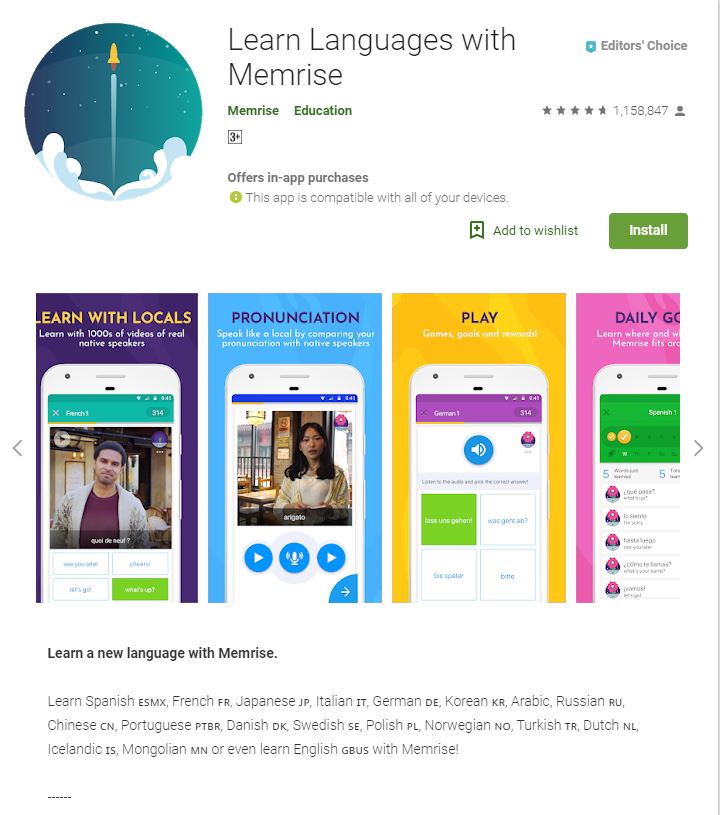 The app has a lesson’s based system that each last for between 10 to 15 minutes. There are different lesson packs for different abilities, tailoring to the needs of both a beginner and an advanced learner. The app involves various fill in the blanks type of exercises, various spelling exercises and various speak out loud exercises to name a few. The app focuses on conversational learning which can be great for some specific type of users. The lessons are also available offline and are just a download away. Babbel is a free app to a certain extent but if you want to get the most out of this app, you’ll be placed in a position to purchase a monthly lessons membership of sorts. There is no argument to the fact that the best way to get fluent in a language is by speaking and if it’s with a native speaker, it’s like a cherry on top. Tandem delivers just that as it lets’s users have a conversation with a native language speaker via text, audio or video chat. The app is based on mutual understanding as both the user and native speaker have to agree on a particular time and day for class. The topics to be discussed are also decided in advance and are later used as conversation prompts to avoid initial awkwardness and nervousness. The app setup is simple but you can only start learning when an app moderator approves of your motive of learning. The app as a whole is worth checking out and if you’re serious you can also pay extra to get a private tutor from the app. 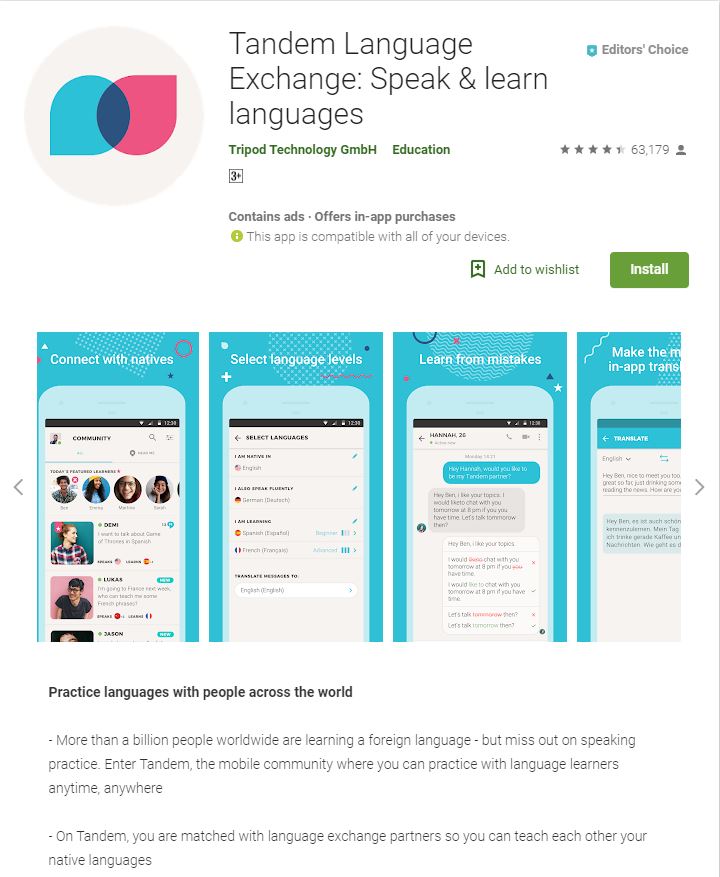 Busuu is one of those apps that is tailor-made for professionals and hustlers. It is flexible and user-friendly. It allows users to choose a supported language that they’d like to learn, and decide their initial stage to commence- Beginner, Elementary, Intermediate, Upper Intermediate or Travel. Busuu is one of the best apps for beginners as it focuses more on basic words and phrases that can be extremely helpful for beginners. The app teaches word both individually and in sentences to help users move forward quickly and with ease.

Google Translate is a lot more than just a translation tool. The language support on Google Translate is by-far the best-in-class. Google Translate, in my opinion, is one of the most versatile tutor apps that one can utilize. Users can translate text, drawings and even voice into their target language which in this case, would be the language that they want to learn or practice. The app also has dictation which can be used to learn the pronunciation of words and phrases. It can be a great instant translator and a better tutor for the right users. 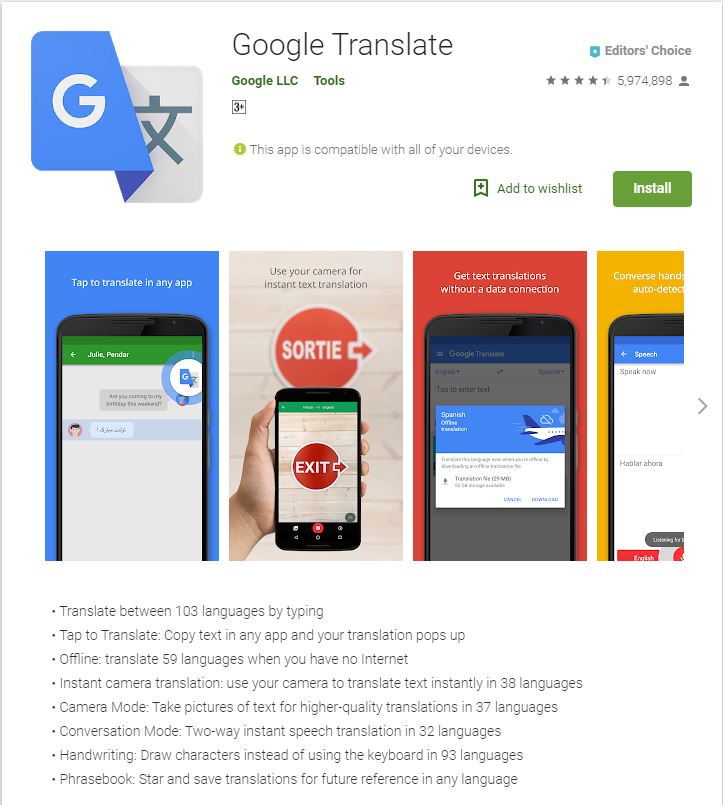 This app takes it to the next level. It is a professional-grade service for learning foreign languages. They have a free version which is aimed at casual users and travelers. The app works like a Pictionary as it has a variety of pictures tied to common phrases and words of a foreign language that you wish to learn. Users have an option to opt in and out of classes at any stage and can also take the entire class if they want to. There is also a feature called ‘Phrasebook” that has a bunch of phrases and words that are commonly used in the language. There are many more phrasebooks which users can purchase if they want to. 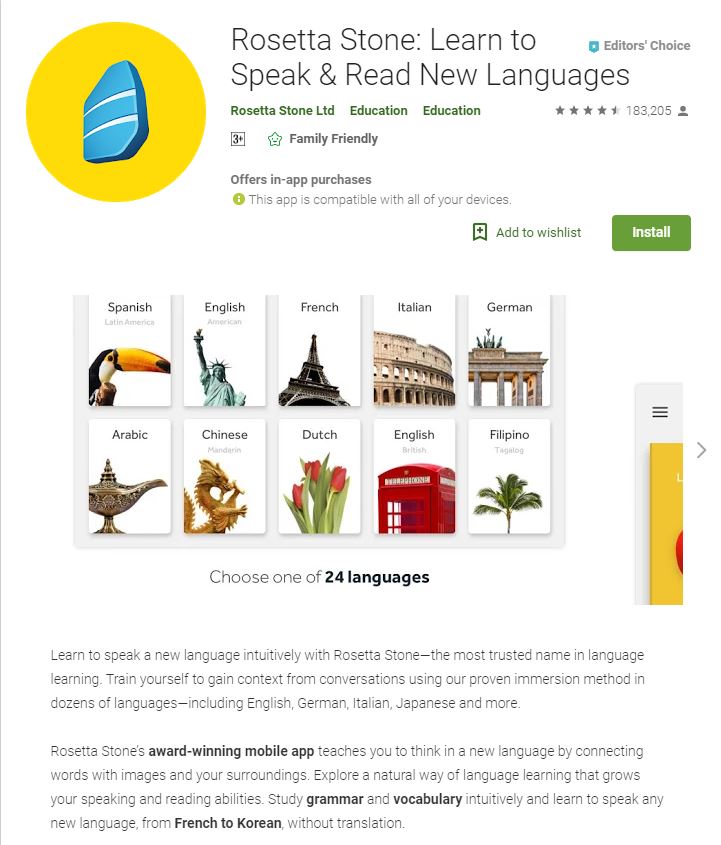 As the name suggests, the app’s motive is to provide a personal tutor to its users at all times, every day, right from your mobile device. It supports a wide array of languages and each language gets a discreet app for itself. These distinct apps are also tailor-made for different types of users. There is a different app for travellers that focuses more on common phrases and words, there is a distinct vocabulary version and much more. Each version of the app is different yet similar in user experience. All these apps have a similar interface that they’re based on and they involve a similar set of topics such as clothing, entertainment, food, colour, greetings, health, directions and many more. Each category incorporates various tasks like a quiz, memory game, spelling practice and more. 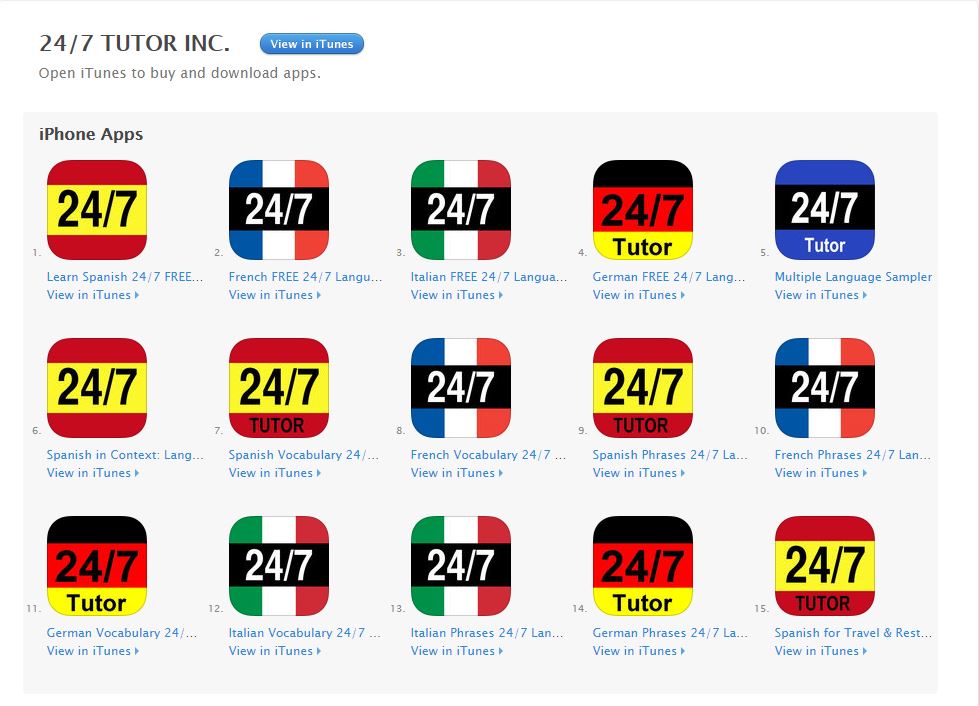 HelloTalk works on a basic value exchange model. Users get connected with native speakers of the language they want to learn and in exchange, users have to teach their language to their foreign language gurus. The concept is simple and works well as it is a win-win situation for both the parties. The app has various tools like correction, translation, and speaking which ensure a full-featured and helpful chat experience. There is a huge list of languages to choose and users can filter out their tutor based on their country and age. HelloTalk works on a simple aspect of learning and is a fine example of great value exchange. 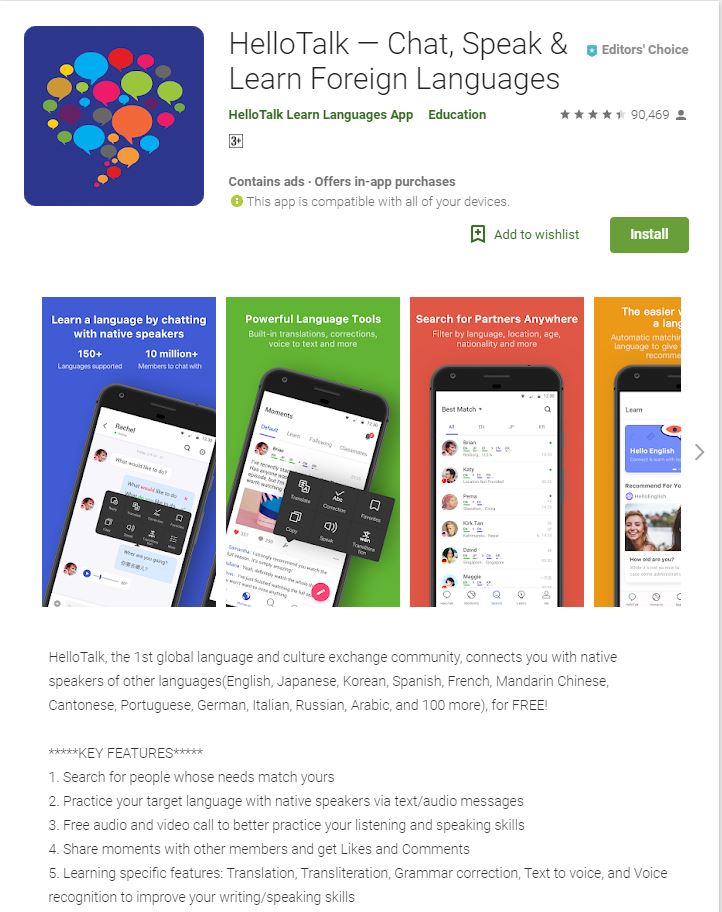 If you want to learn a foreign language and have fun at the same time, Clozemaster would be great for you. It is a fun learning experience with an old-school look-and-feel and an immersive user experience if you’re an 80’s or 90’s kid. The app has almost 100 languages to offer, free account signup to save users’ progress and an optional text-to-speech feature which can come in handy. Beginners can start small with some commonly used words and phrases and work their way to learn more advanced aspects of a foreign language like vocabulary and grammar. Clozemaster can be a great tool for testing your skills or for starting from scratch and also for brushing up on a language that you learned during high school or years ago. 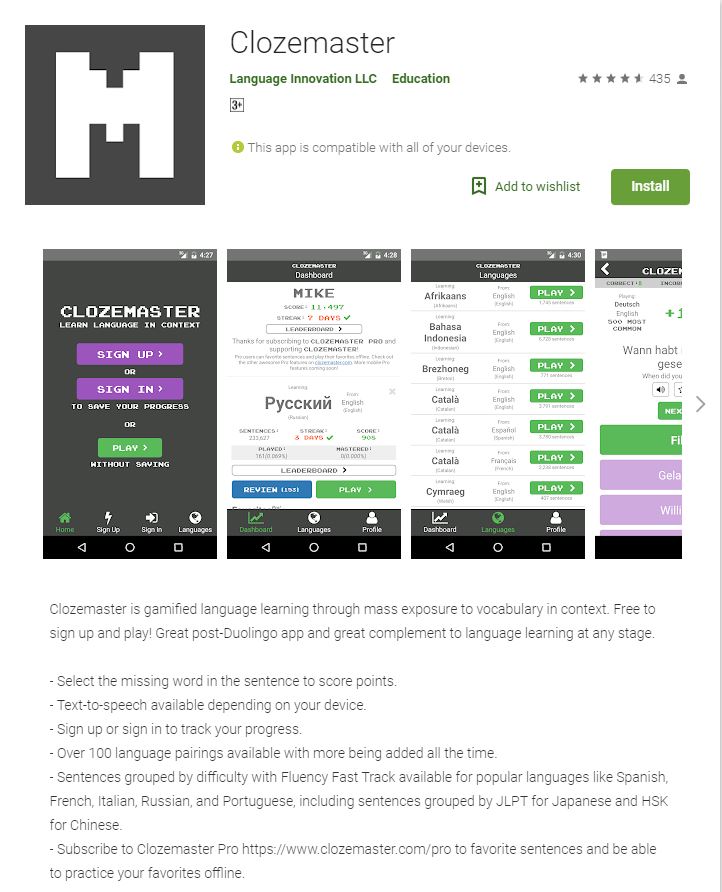 Users can get the most out of these apps as these are suitable for various types of users and their existing knowledge about the language. I highly recommend a combination of two or three of these apps as it repetition would result in better learning experience and lessons learned will last longer in users’ memory. If you have any suggestions or recommendations for us, drop us a comment.