News. For humans, it has been the primitive and near perfect source to gather information. Back when the printing press wasn’t invented and there were monarchies, there used to be announcers and messengers who’d visit common marketplaces and venues to shout the important information. Centuries passed and humans developed and evolved with time. Now news can be read in all forms and by using all sorts of mediums. One can go traditional and read a newspaper or one can go digital and read news from an app or a website. With the power of the internet and some good media agencies that are still credible and don’t sell their opinions, here is a list of News apps which are credible, easy to use and in a way fun to read.

The Wall Street Journal is the largest circulated newspaper in the United States. The Wall Street Journal or WSJ has a reputation for its innovative ways to write feature writings in American journalism. Their most famous news styles are- ‘Ahed’ and ‘leders’ which are the middle-column feature and depth reports respectively. The WSJ has earned a reputation among world media and has also won many Pulitzer Prizes for its contribution. It is one of the best newspapers in the world when it comes to ethical reporting and delivering a clear message. Their app is a great example of a good news app. It has a lot of information to offer and their expressed opinion are unbiased and non-manipulative. 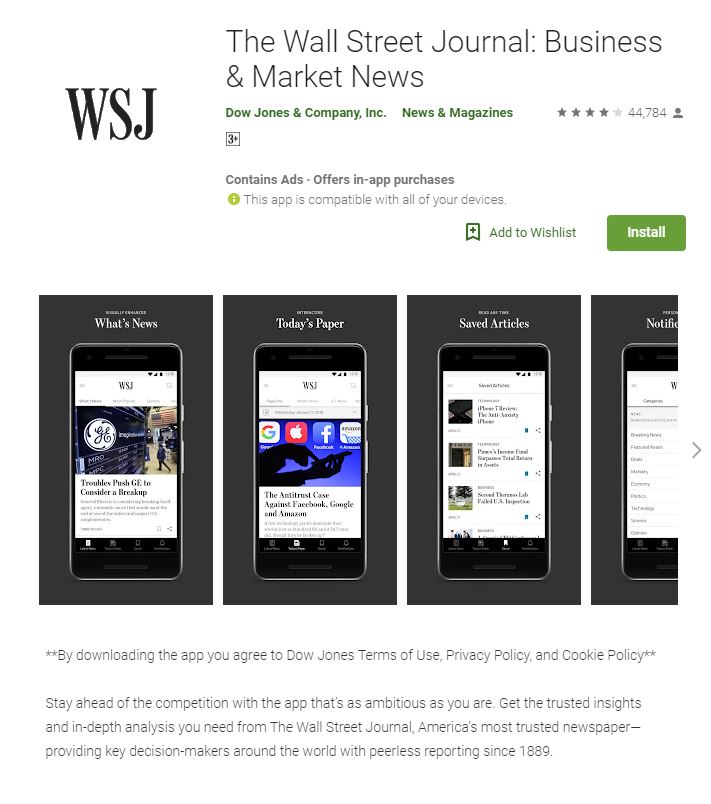 You know what Google does well? Make best in class apps and software. Google News is just another example of that. Google News is free to download app that gives users custom news stories that spark their interests. Google News fetches news from many popular news websites and agencies and displays the best in the lot. The app is not fully-automated as the app is regulated by a team employed by Google. This team ensures that fake news is not displayed on the app. The human intervention also makes it more reliable and trustworthy. Personally, Google News is my go-to app and I use it on a regular basis and so far, I haven’t spotted any fake news on the app. 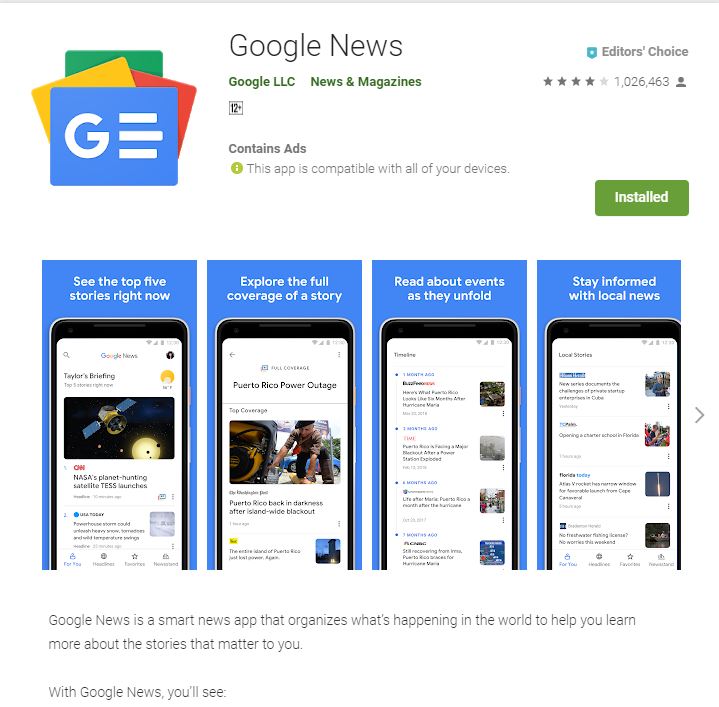 Ah, the flip of a magazine page. As satisfying as it is, nothing digital can replicate the feeling of turning magazine pages. Flipboard tried to mimic the feel of turning a page and made it a big deal for their app, and to a certain extent, they did succeed. The animation that Flipboard uses is very similar to the flipping of pages and it is immersive to say the least. Also, the sources that Flipboard uses to get news from are reliable and credible. The entire experience of using Flipboard is fun-filled and immersive. The app is a perfect example of infotainment. 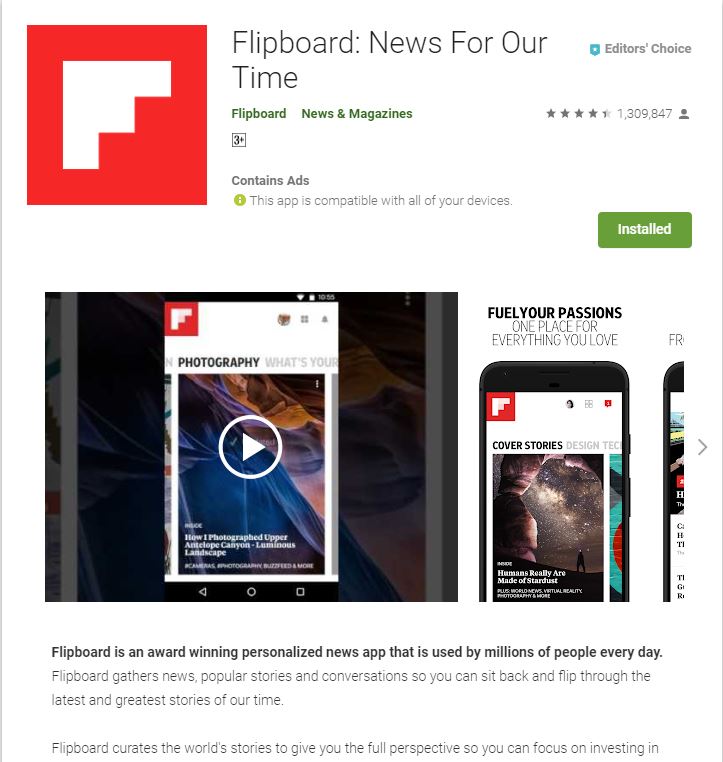 The newspaper who reported Watergate scandal in the early 1970s and was able to bring down President Richard Nixon. The Washington Post or the Post is one of the three big national newspapers of the States (other two being NYT and WSJ). Currently owned by Jeff Bezos (founder of Amazon), Washington Post has a reputation of employing some of the best reporters and journalists in the industry and producing some big stories for the world to read and understand. They are forward-thinking and employ all their resources to deliver the best news stories for the world. Its mobile app is informative, customizable and delivers everything that the newspaper wishes to convey. 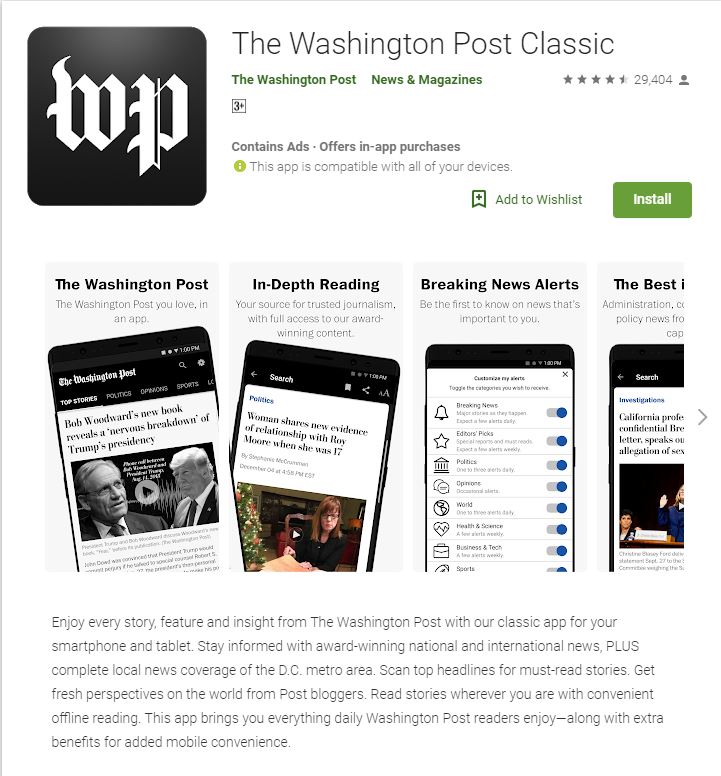 British Broadcasting Corporation or BBC is one of the oldest broadcasting networks of the world. They are a one-stop source for news from around the world. They are credible and they have their subdivisions in many parts of the world. They also offer news in various regional languages which makes their app one of the best in class. BBC app is insightful, unbiased, credible filled with valuable information and has a lot to offer for a news app. Overall, BBC is a great news app to get reliable and unbiased news from around the world in your preferred language.

Feedly is one of the most popular news apps in the world. Released in 2008, it is a news aggregator app for various web browsers and smartphones. It compiles news feeds from various online sources and offers a customized news feed to match users’ interests. It offers support for third-party connection as users can integrate Feedly with their Facebook, Twitter, OneNote, LinkedIn, and other accounts. It also offers continuity as users can browse their feed from the comfort of their smartphone or from their PC, laptop or tablet. The best part is that the app and service are free for all and has a lot to offer. 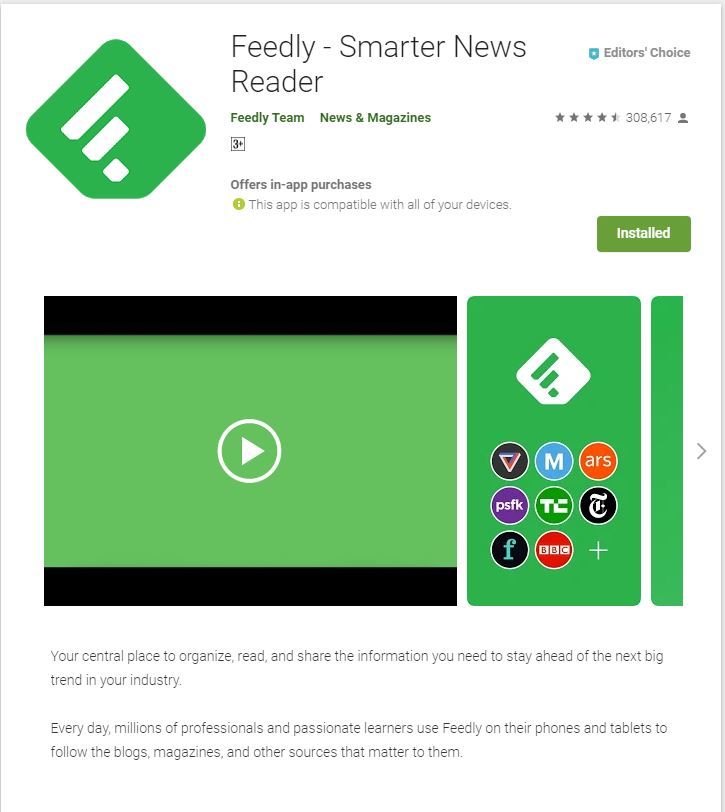 SmartNews is the new kid in apps’ town. It is similar to many news readers. It is a news gatherer that takes news stories from various sources and recommends trending topics. It is simple, easy to use and one can quickly start reading about topics that everyone is talking about. The best addition is that it also sources some articles from opinion blogs so that users can get to know the opinion of people for a particular topic. It has some good things to offer and some bad things but as a package, it is a nice app with a simple interface and a variety of articles and news stories to read. 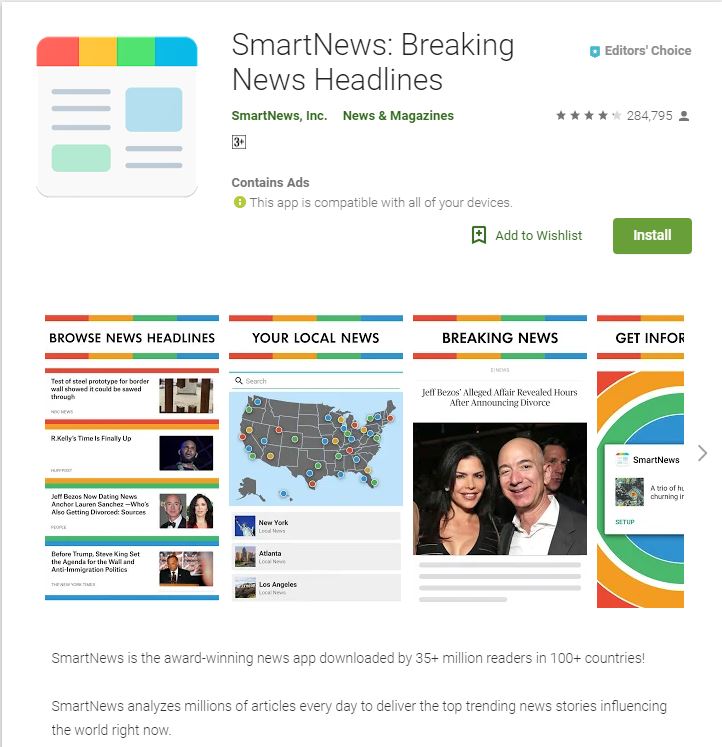 The New York Times is an American newspaper that was founded in 1851. It has till date won 125 Pulitzer Prices, which is more than any newspaper. It has worldwide influence and readership. It is ranked 17th in the world based on circulation and 2nd in the US. New York Times over the years has shown that it is one of the few newspapers that people can trust. It understands and follows ethical standards of reporting and the classic elements of journalism in the states. Over the years, it has shown its supremacy and has become a leader in business, politics and cultural coverage. Their app is a perfect mirror image of their newspaper and it has a lot to offer as a news app. News360 is a straightforward news aggregation app that is well-known due to its simplicity. It offers rich content and a lot of useful information. It allows users to search for their favorite topics or specific news and it works well. For Apple users, it integrates with iMessage and other Apple devices like Apple Watch and others. It also supports third-party connection with Facebook, Twitter, and Google Plus to share news stories with others. It is one of the good apps that will soon come up and gain popularity over the years. It includes 28 pre-made topics for users to select from. The app features offline support for users to read articles if they’re stranded on an island and have no connectivity. It is similar to Feedly but offers a few different features that make it worth recommending. 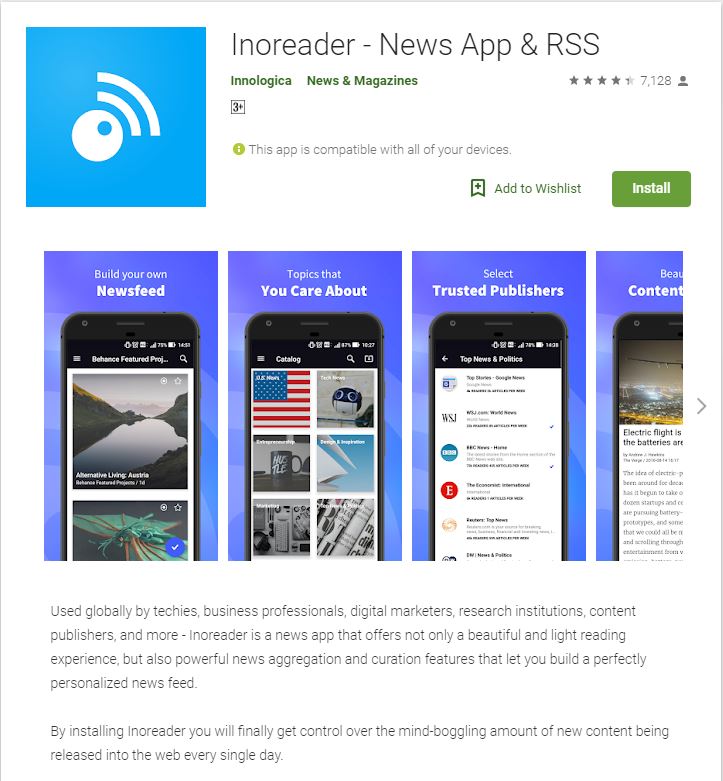 So, this was our list of some of the best news apps that users can use to get news from and to stay up to date with the events that are occurring around the globe. If you have any suggestions for us, drop us a comment down below.